Hi everyone, I came across this page that takes some fresh perspectives to retrofitting our homes. Good inspiration for several activities we do around the estate I'd say! See More
yesterday
0 Comments 0 Likes

Mark Boleat and the Denizen

I hope that Mark Boleat will resign after his accusations that anyone who objects to new developments are 'selfish middle class nimbys'. People in Bowater House objected to the Denizen because it doesn't replace the key-worker homes which used to be on the site. We wanted decent affordable housing here not unneeded luxury apartments. The Bernard Morgan re-development is a perfect example to show why Boleat's ideas will just lead to even more suspicion of corruption within the planning and development industry.

Mark Boleat is a councillor who does not represent local people, he does not live in the City, he was voted in on the business vote. Not only did speak in favour of the development at the Planning and Transport Committee meeting he also voted to Approve it. Knowing it contained no affordable homes and the 106 agreement was half what it should have been. One of his arguments to approve was that Taylor Wimpey had lost so much money already because of the delays in it coming to committee!

Boleat was also on the Police Committee and Property Investment Board during 2014 and 2015 when the decision was made to both close and sell the Police Section House. If Planning Guidelines had been followed then this development should have 33 affordable homes. It is being marketed in Hong Kong as The Denizen, a block of luxury apartments, containing a private cinema and marble floors. The expense of all this unnecessary luxury and the fact that TWCL paid £30.4million for the site means that they can’t afford to meet the Local Plan requirements and the City of London and Mark Boleat have accepted this excuse.

Was Boleat involved in the decision to sell to TW for £30.4million? I don't know but if the City accepted such a huge amount for the site did they accept also that TW would not be able to afford the Local Plan's requirement for 30% on site or 60% off site affordable homes?

Where does that leave Boleat's argument that local people and democratically elected local councillors are stopping developers providing much needed homes? Most of the City's councillors don't represent local people and so we get the Denizen which breaches so many of the Local Plan's guidelines and provides only unnecessary unneeded luxury investment properties being marketed in the Far East. The planners justified the breached guidelines by saying the public will benefit but have never explained how.

You can read about the luxury apartments and the private cinemas and games room in this brochure produced by Taylor Wimpey.

This could prove to be a test case, exploring whether the City really has made mistakes and whether its planning process needs to be more democratic. Local people need to be represented by democratically elected local people who know the area and what is needed. There were 182 objections to this development and all have been ignored. The 13 committee members who voted to approve don't know this area, many have never visited the GLE or the park. The vote was close, 10 members voted against. The main discussion in committee was about the unacceptably low affordable housing contribution and yet 13 committee members still voted in favour of Taylor Wimpey and this monstrosity. Why?

After ten years of austerity the Denizen is morally, politically and aesthetically offensive.

We are relying on crowd funding to win this case, even a small donation of £10 will be enough if enough people donate.

We must protect our community from this monstrosity and use the site for much needed decent affordable homes.

This is the Denizen, overshadowing Bowater House, the Jewin Church, the park and school. 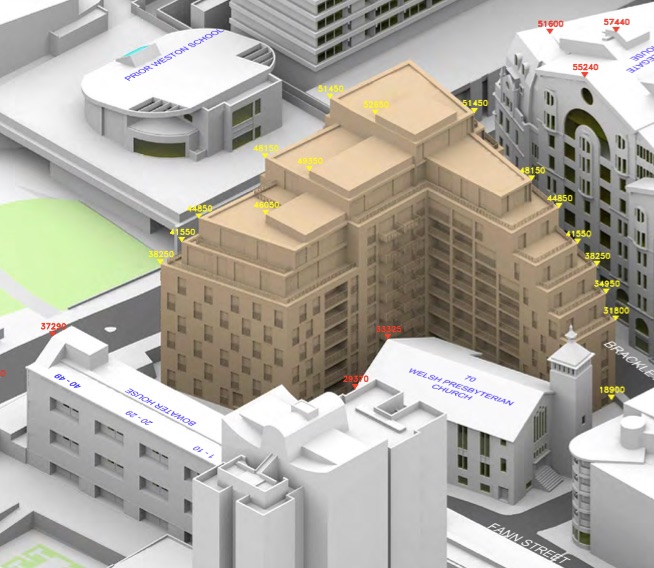 There were a number of reasons for campaigning against The Denizen. For many the most important was that 110 social housing units that provided homes for key workers are being replaced by 99 luxury flats that won't be lived in. The Denizen is being marketed in places like Hong Kong to property investors. Such investors see London's overheated housing market as generating them a profit if they simply buy flats and leave them empty. If they have business in London or want to come here shopping they might spend a few days a year in their flat but most of the time it will be empty. In Westminster the figure is 40% of housing is empty most of the time - and we have a similar situation in EC1 with all the new builds on City Road etc. Islington council did a survey of their part of EC1 in 2014 showing many new flats in places like Dance Square (Central Street) and TP Bennett's Bezier apartments (on Old Street roundabout) aren't occupied. They are ghost home investments. There is no on site social or affordable housing in The Denizen.

Among other things the campaign against The Denizen was a campaign for housing that would provide homes for local people precisely because we didn't want more empty ghost flats in the area. That said the loss of light is not insignificant and will effect not just council tenants on Golden Lane but also the children who go to school on the Golden Lane campus and also all those who use the park. Once The Denizen is built there will be no afternoon sunlight in Fortune Street Park from September to March, and a lot less than there is now the rest of the year. The Denizen will provide homes to far fewer people than Bernard Morgan House did but is much taller and will  have a very negative effect on local people (particularly children) in terms of loss of light and increased heating bills (the flats on Golden Lane Estate were among the first in London to be designed for solar gain and losing sunlight means they will need more heating and some tenants will be thrown into fuel poverty). A different design or the refurbishment of the now demolished building could have actually given us much needed homes for local families. The Denizen is aimed at investors and is designed to be empty ghost homes. Sorry to hear about the empty flat next to you. I agree a family ought to have use of it, but sadly investors don't care about families.

But why should it be stopped? Unfortunately I didn’t want to see BMH demolished, but I think the CoLC would have been better utilising it as social housing, but given the choice I’d rather see it as an improved building, than left to decay and have It vandalised.

with the planning of new social housing to be implemented on the Richard Cloudsley site, I think is very much needed.  I have never agreed with social housing being bought, this drains much needed housing stock, and think it abhorrent that greedy lease holders want to charge extortionate rent, for a dwelling that was built for social housing.  When people decide to buy a property on GLE, they buy with they’re eyes wide open, obviously do the ground work, and seek information on up and coming work.

Next door to me, there is a 3 bedroom flat privately owned,  which has been empty for the past 18 months, I don’t know why, and when trying to find out, I’m stonewalled.  It’s a crying shame this property could be a much needed family home.

I have no sympathy for anyone that’s worried about they’re daylight being hindered, or an obscured view.  I’d be more concerned about someone being denied a safe comfortable home, because someone blocked planning permission!! NIMBYs certainly do spring to mind.