Christine Clifford commented on Sue Pearson's blog post Golden Lane Estate tenants due a water charge refund
"Thank you all for this. It beggars belief that the CoL still has not repaid the full amount with interest as some other councils have ."
9 hours ago

On the 13th January there was a full City Council meeting where Sue Pearson, your local Common Councillor, proposed a motion that the repairs programme for all the City Estates be accelerated by using some of the City’s financial reserves. The repairs programme is moving incredibly slowly even by the City’s standards with the last 5 year plan being inadequately funded while the Estates decay and tenants live in unacceptable conditions. The City has a fund called City Cash which has reserves of £2.6 billion. They have dedicated £50 million of this money to support small business during the pandemic but nothing to support residents. £37 million of this money has not been spent and Sue suggested that, as a start, it might be a good idea to redirect this to Estate repairs.At the Council meeting discussion of the motion was cut short by a point of order and the the motion to speed up repair of your Estates was lost by 75 votes to 19. A supportive councillor, Graeme Harrower, has written a…See More
yesterday
0 Comments 0 Likes

Any one who lives or works in Barbican Cluster is invited to attend the Barbican Cluster Panel MeetingThursday 20 January 2022 from 1800 to 1900 hours @Golden Lane Estate Community Centre, Fann Street, London, EC1Y 0SAYou can meet the Dedicated Ward Officer Team and other members of the communityReceive an update on local policing mattersHave a say on the cluster priorities for policingThe room will be well ventilated so please wear warm clothing.Seating will be well placed and face masks are required unless exempt.Numbers will be restricted due to COVID recommendations so please confirmyour attendance with us in advance.To confirm attendance please contact PC Christine Phillips,christine.phillips@cityoflondon.police.uk, 07736 952395.See More
Monday
0 Comments 0 Likes Despite major opposition from the local community and huge concerns about the harm caused to the neighbourhood, planning permission has been granted to the City of London and Islington Borough Council for the development of a 14-storey tower block, 2-storey sports hall and a two-form entry primary school on the site currently occupied by Richard  Cloudesley School.

GLERA argued for a deferral so that a better more considered scheme could be developed, one that would deliver better quality housing for our future neighbours and complement rather than damage an area of international architectural interest.

It has been recognised by both Islington and City of London planning committees that the scheme causes significant harm. On the basis of a resident vote at the last Public Meeting  on Tuesday 10 April, a resident lead group, Fans of Golden Lane (Friends, Admirers, Neighbours and Supporters) are seeking legal opinion to ascertain whether the City and Islington have properly and accurately considered this harm in deciding in favour of the perceived benefits of the scheme.

The application was also noted to be short on conditions which would have a significant bearing on day to day interaction with the development, such as restrictions on out of hours use of playground and the needless destruction of the established trees bordering the COLPAI site and the estate allotments.

Read press for both campaigns here

GLERA is working hard to get the appropriate conditions put in place. See documents below:

Prior Weston Consent (conditions as reference)

Residents of Golden Lane and the local community were represented by Anne Corbett and Clem Cecil, both of Basterfield House. Read their presentations here.

Councillors Mark Bostock, Graeme Harrower and Chris Hill voted against the proposals. Golden Lane Estate resident, Councillor Susan Pearson, argued vigorously on behalf of a deferral but was unable to cast a vote as she was deemed to have a pecuniary interest as leaseholder of a flat adjacent to the site. The other twenty Councillors present voted for the proposal with one abstention.

Read article in City Matters - quotes from residents below:

"What I'm particularly disappointed about is that somehow the system has managed to set residents against parents. Our concerns don't meet and it's unfortunate we've been set against each other because, ultimately, we don't want an argument with the parents and we need a good relationship with the school and at the moment that's quite difficult." Anne Corbett

"I think it's incredible hypocrisy that the City is washing their hands of this because it's their application and their school. The fact they can just (try to) defer to Islingon because, conveniently, Islington has already ruled on this matter means that we, the residents, feel between two stool." Clem Cecil

Get links to other press articles on the Media / Press Coverage page.

GLERA is supporting alternative low-rise proposals for the site that include the same area for the school and include more social housing in an integrated scheme that does not breach planning policy. Click here.

The Golden Lane Estate RCS Facebook site provides comment on the application and summaries of recent discussions, the opengoldenlane blog covers many of the most important issues.

Updates can be found in the forum where you can also add your own comments.

Wednesday 31 January: Notice given that revised drawings have been submitted. It would appear that the proposed changes are mainly on the ground floor but the tank for the sprinkler system will now be in a new basement under the 12-storey tower with the boiler room and other plant. This means the MUGA will be bigger but still no on-site play space for resident children.
The electricity sub-station and bin storage will remain on the g/floor but there will be affordable work spaces, large enough to accommodate 18 workers but with only 2 additional cycle spaces.
The other change is that the lifts have been moved to the front of the 12-storey tower and the single staircase to the rear. The staircase also seems much narrower.

On Monday 29 January a last minute move by the City to delegate the planning decision solely to Islington Council was rejected. The City will continue to have a say on the scheme, much to the relieve of the many Golden Lane Estate residents who are most affected by the development although there are concerns about a potential conflict of interest for three members of the City of London Planning Committee. For more info read the recent article in City Matters or editorial by Paul Lincoln

On Monday 11 December our local MP, Mark Field, visited Golden Lane Estate. He was taken on a walkabout by Tim Godsmark, GLERA Chair and a small group of residents - Anne Corbett, Charles Humphries and Emma Matthews. 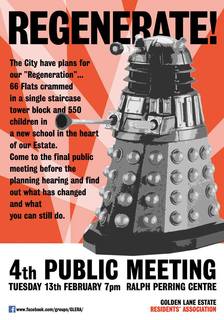