COLPAI : despite lockdown work about to resume!

The City Corporation announced yesterday that construction work on its own COLPAI development would recommence after a two week break, with workers maintaining social distancing “as much as possible”, but acknowledging that this may not always be possible: Recommencement of works at COLPAI site on 14.4.2020

The City Corporation has urged residents of Golden Lane Estate, part of which adjoins the COLPAI site, to comply with Government restrictions on staying at home, going out only for essential purposes and maintaining social distancing. We have been doing so. From Tuesday, when residents of more than 60 small flats on the estate look out of our windows, we will see construction workers who have not stayed at home, doing non-essential work and not always maintaining social distancing. This will be happening on the site of a development by the City Corporation itself, our landlord.

By contrast, a private developer ceased work at a site only a hundred metres away from COLPAI just after the lockdown began, announcing it was doing so “due to the current pandemic…and the health risk it presents to all people”. The reference to “all people” includes the construction workers, their families and the people they come into contact with.

The City Corporation has tried to justify its contractor, ISg, recommencing work on COLPAI by quoting the Government’s guidance to the construction sector, which begins by referring to construction work playing “an important role in ensuring public safety and the provision of public services”. The work on COLPAI does not ensure either public safety or the provision of public services at this time, unlike (say) the construction of temporary hospital facilities.

The recommencement of work on COLPAI will be harmful to a number of residents on Golden Lane Estate. As well as being demoralised by seeing the Government’s central lockdown message being flouted with the approval of their own local authority, they will be affected physically. In normal times, the noise from the site is stressful enough. But these are not normal times. People who would otherwise be at work are working from home. Children who would otherwise be at school are now learning in small flats, unable to go out except with their parents to exercise once a day. Young people have had their freedoms curtailed. Older and vulnerable people don’t go out at all. Everyone feels more stress because of the threat this crisis poses to their lives and livelihoods. To have that stress compounded by noise between 8 am and 6 pm every weekday because of non-essential construction work is intolerable.

The City Corporation could have joined the Mayor of London (Labour) and the local MP (Conservative) in calling on the Government to ban non-essential construction work, but has instead chosen to support such work by allowing it to continue on the Corporation's own project, regardless of the harm this will do to residents in very close proximity. Unlike any other local authority, the City Corporation doesn’t need to worry about what its residents think, because only 20% of its councillors are elected in mainly residential wards; the other 80% are, uniquely, elected mainly by business voters, who typically have little interest in what their councillors do. This has for decades caused City residents to be poorly served by their council. When this crisis is over, that will finally need to be addressed.

In the meantime, here on Golden Lane Estate most of the practical response to the crisis has come from volunteers in our own community, setting up a GLE Covid 19 HUB to support our neighbours in need. We have been working with Liz King and others in the Barbican who, with Age UK City of London, who have set up the Square Mile food bank for City residents.

The City Corporation has played a very secondary role, although I would record my thanks to its Head of Housing Management, Liam Gillespie, for his individual efforts in arranging support where we have needed it. But as a whole the City Corporation, which has insisted that its non essential staff work from home, has been tone deaf in this crisis, while some of its residents will be literally deafened by non-essential construction noise.

The Corporation seems to think that spin (“we must work together”) is a substitute for substance. It isn’t. On behalf of Golden Lane residents I deplore the lack of moral leadership shown by the City Corporation and the irresponsibility of its contractor ISg, and call on the Corporation to reverse this decision immediately.

Please email your concerns to: info@colpai-project.co.uk and the City's dedicated Covid email col-covid-19@cityoflondon.gov.uk 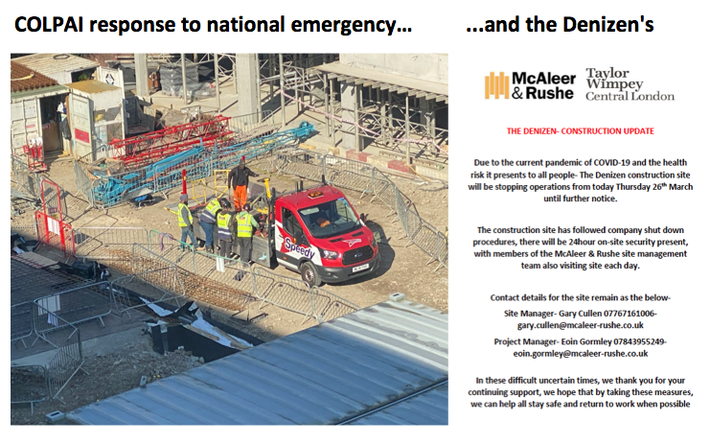 Please see the text of an email sent to the COLPAI team and the City today:

No doubt you have seen the Secretary of State for Business, Energy and Industrial Strategy’s letter to the construction industry today which refers to the new guidance on operating site during the crisis and which I attach below. I assume that ISG will be following these to the letter.
I have a number of concerns about restarting the site and whether ISG will be able to meet the guidance. These are:
I appreciate that if this guidance cannot be followed and the site has to close again that there are financial implications for both the City and ISG. However this is a time when all businesses are suffering for the public good it seems strange that a local authority, part of whose remit is to maintain public health, should be pursuing a course of action that puts both the workers on site and local residents’ health at risk. No doubt ISG are aware of Government support for both the company and their workers and they would be in the same position as many residents who are furloughed and have to stay at home. You may also have seen the comments from ISG workers on their Facebook page who are not happy with work continuing on ISG sites.
If work where to stop again then there is no need that either party be in breach of contract. The stoppage could be by mutual agreement with and agreed extension of time or if it is a JCT Design and Build contract then the contract supervisor could issue and instruction suspending the work under clause 3.10. More radically the principle of a frustrated contract could be applied and the existing contract terminated and a new one drawn up to take account of the changed circumstances. It is clearly not my place to advise on contract administration and government funding but there are mechanisms to put the project on hold and minimise the cost. The necessary provisions for social distancing and personal hygiene outlined in the guidance will also have costs both from the implementation and from the concurrent delays.
Lastly I would ask that the City and the team in general reflect on their duty of care to residents whose wellbeing is already being affected by being confined to their small flats. Many of them will be having to get by on reduced salaries or benefits if they have been made redundant. I would ask if a proper risk assessment has been carried out comparing the cost savings on restarting the site against the impact on the physical and mental wellbeing of its neighbours. If the City is determined that the work goes on and that money is more important than health then I would suggest that they closely monitor the health of residents in Basterfield House and Hatfield House and especially guard against the risk of suicide as many residents may be becoming clinically depressed with the situation already.
I would ask that you reconsider the foolhardy decision to reopen the site.
Regards,
Tim Godsmark
23 Hatfield House
Site-Operating-Procedures-Version-3.pdf

Wrong on so many levels:

How are you suppose to work from home? Sick and elderly in their cramped flats - no peace. Key workers trying to rest after a night shift? Residents told to stay home with dust and high levels of noise, then faced with a fine if they try to escape to outside space.

This morning while walking down Farringdon Road I seen builders on Crossrail practising no social distancing at all. A team of them were all smoking together blocking the footpath.

ISG plc and the City of London's decision to order construction workers back on site in the middle of a pandemic is nothing short of scandalous. It speaks volumes about how both organisations value the lives of ISG workers, Golden Lane residents and NHS workers.

'Safeguards' such as asking workers not to take public transport are inadequate and will be unenforceable. The very nature of construction work requires close collaboration. The school building is now level with, and workers will be within virus transmission distance of, a communal refuse chute at Hatfield House. Portaloos are in close proximity to Basterfield House. Both buildings contain elderly and vulnerable residents who are understandably deeply frightened by this news.

In addition to the obvious danger, ISG and City of London's reckless decision will also deeply affect the wellbeing of people confined in small flats who are being asked to do their bit by staying home. Residents won't be able to use their balconies and will need to keep their windows closed during the day - the only tiny bit of fresh air and outside space they have - due to the noise and dust from the site (which has been extreme over the past few months).

There is no sane reason why the COLPAI site should be reopened before the end of the lockdown and we can only hope this decision is reversed before tragedy strikes. 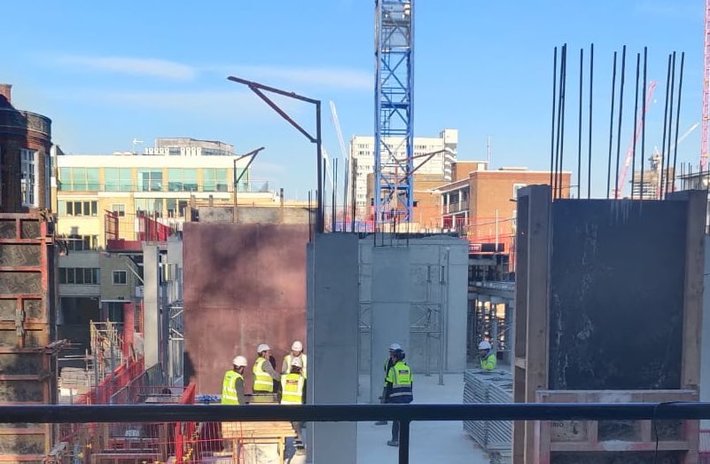 Thank you City of London and ISg - as if the Covid-19 situation wasn’t distressing enough, you have now allowed work to re-start on the COLPAI site. Those of us shielding or self-isolating have literally nowhere else to go to escape the noise. There is no way this work can be considered essential but the City of London puts money before the health and well-being of its’s residents - what a surprise!

This is unacceptable when the majority of residents are confined to their homes for most of the day. Why is the City behaving with less regard to its residents and the builders than Taylor Wimpey at the Denzin?

The work cannot be classed as essential and to continue it is putting peoples lives at risk. A local authority as a client cannot pass the buck for this to the contractor. It has a moral responsibility and a legal responsibility under the Construction Design Management Regulations for the safety of worker on site.