Bernard Morgan House in Fann Street was a former Police Section House (hostel for police officers and court staff). It closed in 2015 when the City of London sold the site to Taylor Wimpey Central London and planning permission was granted to demolish Bernard Morgan House and build luxury housing in May 2017. To the great sorrow of many local residents the building has since been demolished. RIP The proposed development from Taylor Wimpey, a10-storey high-rise named The Denizen, is currently being marketed in Hong Kong with prices beginning at £725,000 for a small studio.

There is no social housing provision.

Click here for more background on Bernard Morgan House, the attempts to have it listed in 2015, the planning committee meeting and the effect of the proposed scheme on the surrounding area.

The plans have been widely challenged by local residents who, through the campaign group, Save Golden Lane Consortium, sought to take the City Corporation's planning committee to judicial review. They argue the proposed building is out of scale and completely at odds with the visionary architecture of the area. It will completely engulf and obstruct sunlight to the Jewin Welsh Church, a heritage asset, which also accommodates the Hatching Dragons Nursery School, and the outdoor learning and play areas of the Prior Weston school. It will also overshadow Fortune Park, Bowater House, Breton House, Cobalt House and the Cripplegate Institute.

Click here for more detail on just how badly residents will be affected by loss of sunlight. You can read the letter sent by GLERA to The Rt Hon Sajid Javid MP requesting he call in the planning application for review. You can read other submissions and letters on the OPEN Golden Lane blog along with detailed arguments against the proposals and regular updates on the campaign.

Judicial review is a type of court proceeding in which a judge reviews the lawfulness of a decision or action made by a public body. In other words, judicial reviews are a challenge to the way in which a decision has been made, rather than the rights and wrongs of the conclusion reached. The Save Golden Lane Consortium took their case to a judicial review of the planning process in October 2017, arguing the independent sunlight survey was inaccurate and the panel had breached listed building guidelines. They also took issue with Taylor Wimpey's £4.5 million affordable housing contribution, which is less than half the target set out in the Local Plan.

High Court judge Mr Justice Supperstone dismissed the application for review, finding no fault with the planning process, but conceded the group's claims had some merit, leaving the door open for them to seek reconsideration.

Subsequently, the Consortium were granted a March 1 date to take their case against the City Corporation's planning committee to a judicial review at the Royal Courts of Justice.

The Save Golden Lane Consortium had to withdraw the day before the hearing after receiving a second opinion from an independent and highly experienced specialist QC, that the strengths of the legal claim were outweighed by the increased public expense, the real risk of losing the claim and being liable for potentially substantial legal costs. They very reluctantly accepted that advice and, to avoid further expense, reached an agreement with the City and Taylor Wimpey to discontinue their claim without any payment of costs.

The Consortium were deeply unhappy to have had to withdraw, particularly as a national charity had written to the Court to say it wished to join the claim if the Consortium were granted permission to proceed, but felt nevertheless their campaign had successes to celebrate:

Significant funds were raised through the Save Golden Lane Crowd Justice fundraising page and various fund raising events  which has helped pay for the following:

The campaign has attracted significant media attention, and article in the Mirror On-line - "My children can't breath": Terrified parents slam luxury flat developers for 'toxic dust' descending on schools - and a recent interview with ITN news below. 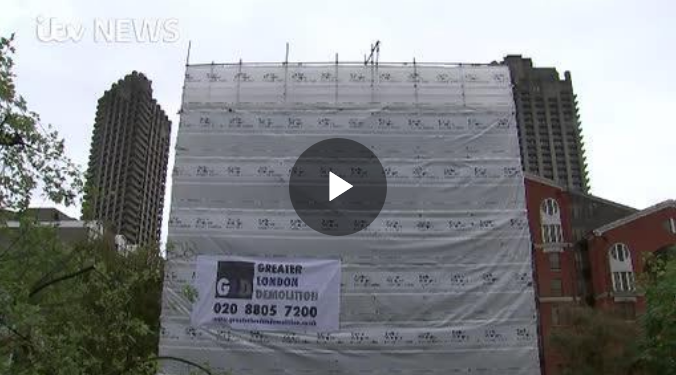 There are also a number of newspaper articles you can access via the Media / Press coverage page including MailOnline coverage of the Spectres of Modernism installation on the side of Bowater House.

During the months October to December 2017 an installation of protest art banners hung from balconies of Bowater House emblazoned with slogans dreamt up by leading artists and writers, including Turner Prize winners Jeremy Deller and Elizabeth Price, and Booker Prize nominated author Tom McCarthy. 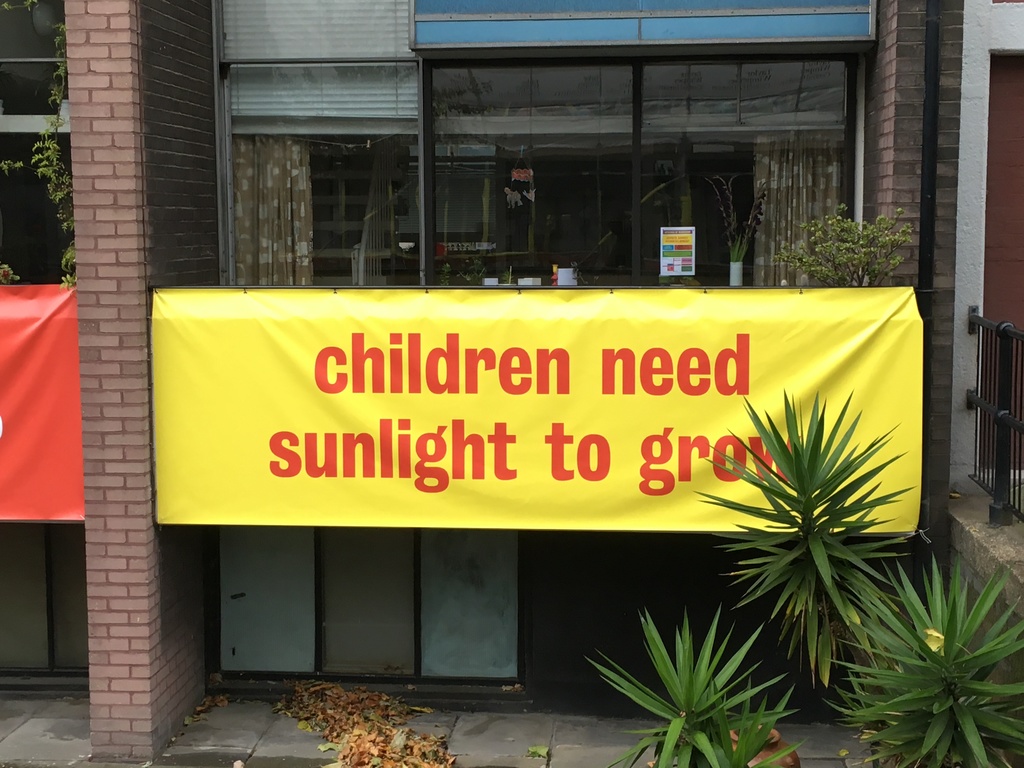 Messages include ‘Zombie Investors Take Stock’, 'your S106 cream has gone sour', ‘the Gluttons, Denizens of the Third Circle’, and ‘Wimps’.

Further artists were invited to document the installation and on February 2 their work and some of the banners were sold in support of the Save Golden Lane Consortium at an evening of performances, readings and screenings to consolidate the protest.  The event raised over £2,300.

Taylor Wimpey send out a regular newsletter and hold monthly Liaison Group meetings. Find information and archive information here. You can sign up for weekly updates here or freephone 08081 686 677

If you are concerned that the dust may be affecting you contact rachel.sambells@cityoflondon.gov.uk or environmentalhealth@cityoflondon.co.uk.

If you are affected by noise find advice and permitted times of operation on the City of London website.

To add your comments to the Bernard Morgan House forum click here.