Do you have Full Fibre (FTTH) Broadband?

As of Wednesday 27 March

On Thursday 21 March Colpai held a drop in at the Golden Lane Community Centre to consult on replacement trees to  border the allotments and waste strategy. Boards can be downloaded here.

The Waste Strategy Consultation was presented as a single board outlining two options and dismissing a third. Normal protocol would require a separate board for all three options listing the pros and cons of each. As it was the presentation lacked any reasoning what so ever.

It should be noted that the board at the consultation presented an OPTION 1 and OPTION 2 suggesting an equity between the choices and disregarding any history. For the record you can see that board here. On the insistence  of residents the options have since been renamed and can be seen below. However, attendees were  encouraged to fill in the survey at the meeting on this implied neutrality.

Not providing or even exploring a third option through the school onto Golden Lane essentially creates a divisive scenario where one neighbour is pitted against another. Baltic Street West - as now noted is the current consented strategy however consultation was applied as a condition because objectors suggested that Baltic Street West could not take bin lorries turning. Consultation should have directly addressed these concerns and outline the developers case in an effort to satisfying residents that there is no risk to pedestrians and road traffic users. Drawings should have shown method of operation, turning circles and any roadway alterations

This proposal was rejected in the first round of pre application resident consultation and should therefore not be an option. It should have been made clear that this option went against residents wishes, even if it is the easier option for the developer. To subliminally label it as OPTION 1 and in red and hence more eye catching (original presentation board) is particularly biased and leading.

Agreeing to use of Basterfield Service Road for waste removal opens up the use of the service road for daily food and other deliveries along with potential out of hours access to the sports hall. This is not the 'low impact' solution as suggested.

This was not properly explored as it had already been dismissed on the subjective ground of health and safety. This is clearly something the school does not want and as a result they are being given precedence over residents. 90% of the waste will come from the school building and will be moved on a daily basis between the school and the bins across the playground invalidating the H&S argument. Bins can be moved whilst children are in lessons.

In summary, the developer has not show how the consented scheme, Baltic Street West, will work. They have reintroduced a rejected option in Basterfield Service Road pitting residents in Basterfield against those in Hatfield.

The developer has not produced the very option that will work - removing the waste via the large school gates directly for collection onto Golden Lane. Their reason: pushing bins across the school play area will present a health and safety risk, an area which is not used before and after school and during lesson time. It looks as though the scheme is looking to offload any inconvenience onto residents.

Added to this there was no discussion about deliveries...... another story?

The survey questionnaire asks you to decide between Baltic Street West and Basterfield Service Road. I suggest you leave this blank and fill in the comments with the suggestion that the waste is logically removed directly to Golden Lane. If you do not live in Basterfield or Hatfield House you might like to suggest that responses from residents of these blocks are heavily weighted to ensure those affected have the largest say.

The survey will close at midnight on Friday 5 April and can be accessed here:

Please do respond, ignoring the options and using the comment box to indicate your concern at the inadequacy of the consultation and push for a third option. It is very important that residents engage - not doing so will not help us resolve this very problematic issue.

Councillor Sue Pearson is a resident of Hatfield House, Golden Lane Estate and is a representative member of the Cripplegate Ward

Click on link for the 4 conditions relating to deliveries and waste collection for Colpai.

I thought it would be useful to look at the refuse arrangements for Prior Weston School which is a good comparator. The have eleven 1100 litre Eurobins. Five are used for general refuse, six are used for recycling. In addition they have five or six smaller wheelie bins and areas for bulk refuse. The refuse storage area is 49 sqm. Collections are every day of the week with  refuse collection every Mon, Wed and Friday and recycling on Tues and Thurs.

Bear in mind the CoLPAI consultation states collections would be once a week, and the proposed storage area is around a quarter of that required at Prior Weston there is clearly a reality gap in the CoLPAI proposals. Here is a plan of the Prior Weston bin store (coloured red) and a photograph. 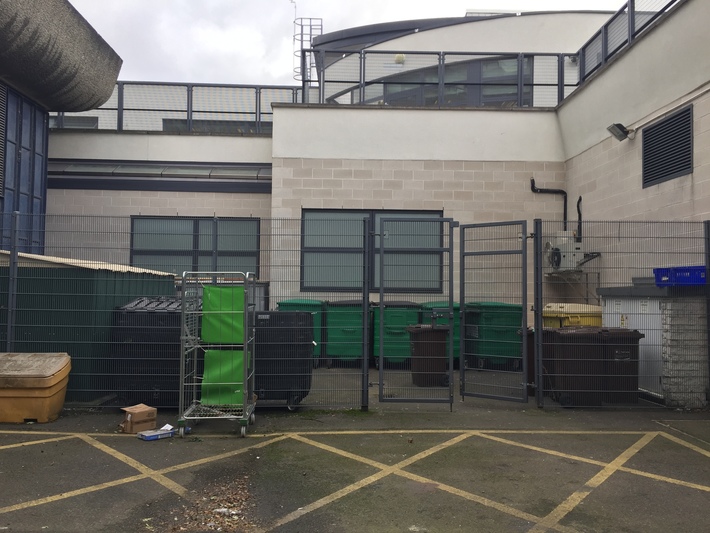 At the consultation event on 21 March there was nobody with any technical expertise able to clarify some quite fundamental points.  We were given limited and flawed information and the choice was not a real one.

1. 10 bins are mentioned on the information board presented.  Five are drawn on the current plan presented.  The Colpai representative said all 10 bins would fit in the building as drawn but he did not know how big the bins would be.  This is significant because in either scenario providing space for 10 Eurobins, for example, whilst they are awaiting collection at the street edge would be around 20 sq m minimum.  The architects need to draw the street side collection point for either scenario on their plans so we can understand the significance and practicality of the proposal.

3. The Health and Safety risks of turning/reversing large refuse collection vehicles in both scenarios should be presented and explored.  The architects and Highways consultants need to present a vehicle tracking plan for both options, either directly in front of people’s homes for Basterfield and on a well used cycle route on a heavily parked dead end street for Baltic Street.

4. The Colpai representative also said that there was not level access from the Golden Lane entrance to the school entrance.  He must be misinformed as this is counter to Disability Discrimination Act legislation and Building Regulations.  So it should be possible to take the bins through the school site to collection on Golden Lane out of hours.

5.  I also think that this condition should be considered alongside any other conditions regarding vehicular access for deliveries, especially to the school kitchen and office, teachers’ Amazon deliveries and the like.  The impact of additional vehicle movements in either scenario will only exacerbate the difficulty of refuse vehicle access off narrow carriageways.

6. Similarly what restrictions are made on parents delivering their children to school by car?  We now know that the school’s catchment area will be significantly larger as there are insufficient local children for this school.

7. And what conditions are there on access and parking for users of the school hall hours out of hours for community and commercial events? Again in both Basterfield and Hatfield options additional parking whether legal or otherwise will constrain the access for refuse vehicles.

8.  Do we think it is acceptable that one week’s worth of school dinner food waste for 458 pupils + staff will be sitting next to our homes and community allotments?

It was very clear that we have been presented with inadequate information to make an informed choice and that not all options had been presented.

Thank you for your advice about completing the survey without a vote Sue - I have done that and suggested that they collect the waste from Golden Lane. I note that the survey appears to be open to CoLPAI parents and neighbouring workers; and presumably anyone who wants to fill it in. 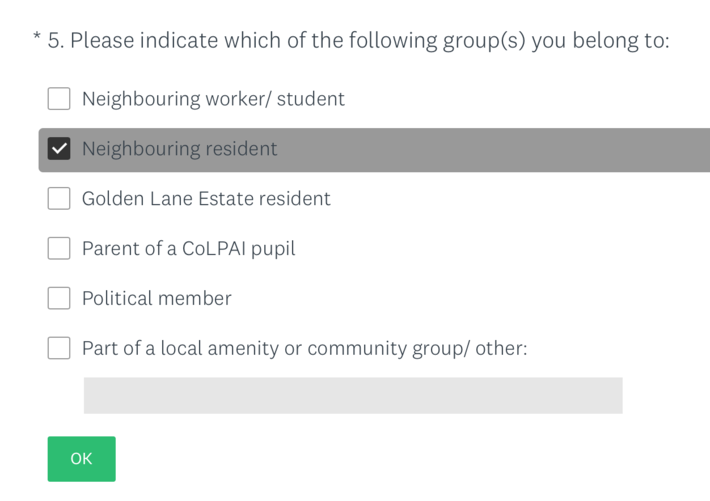 The CoLPAI developers have already reneged on planning promises about keeping the trees, crushing concrete on site and now incorporating Basterfield Mews as part of their scheme. What next? If they are allowed to use Basterfield Mews as part of their site, there will be no way to stop kitchen deliveries, visitors to the MUGA and the School Hall using it. This was a small, but hard-fought concession.